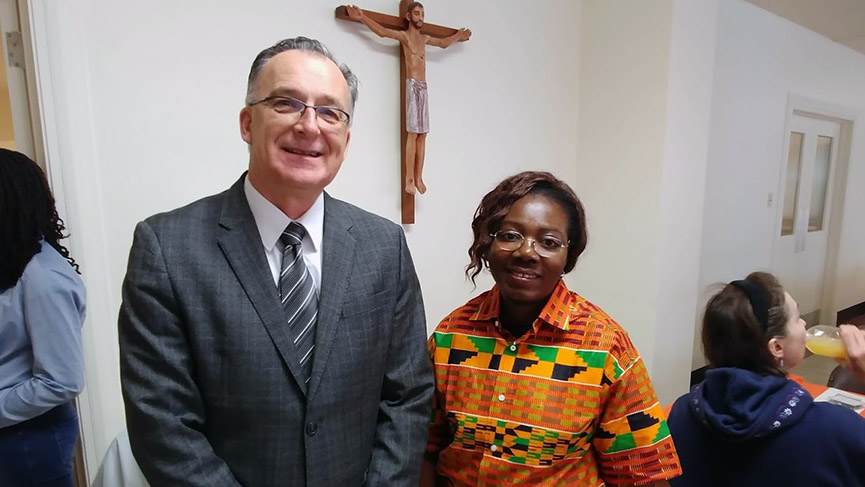 Saturday morning, on the feast of Saint Marguerite-Marie Alacoque, about 100 people (representing individuals and groups who contributed to the diocesan annual appeal) attended a Mass of Thanksgiving celebrated by Archbishop Christian Lépine.

There was a warm welcome at the entrance of Mary Queen of the World Cathedral, where several members of the personnel “from 2000” – as they say; meaning members of the diocese of Montreal’s administrative personnel (located at 2000 Sherbrooke St. West) – who chose to give of their time voluntarily to thank all those who provide financial and spiritual support to the diocesan Church.

“This Mass, offered in all simplicity, is celebrated in your honor, said Archbishop Lépine in his homily. We would like to say thank you. The benefactors are dedicated first and foremost to praying for the Church so that it can accomplish its mission: to announce Jesus Christ and allow Him to convert our hearts each day. Dear donors let us pray, so that our diocese continually leads everyone to personal conversion: employees, volunteers, religious brothers and sisters, consecrated men and women and priests. Today, we celebrate the feast of Saint Marguerite-Marie Alacoque! She who saw the Sacred Heart of Jesus… The Heart that loved the world so much! It was not planned! It just happened this way. It is a reflection of what we want to do in our church… God does all things well…”

This initiative is the brainchild of diocesan treasurer Benoît Cardin, c.p.a.. He insists, however, that the honors go to his “exceptional assistant”, Ms. Jeanne Folly, without whom, he says, none of this would have seen the light of day.

“In 2017, I went to Rome for the Catholic Fundraising Congress organized by the diocese of Sydney. That is where I became aware of the importance of saying thank you to our donors, but also that it is important to build ties with them. When I proposed this Mass of Thanksgiving to our archbishop, he said yes right away, but he wanted to go even further: to open it up to all the benefactors – not just to those who donate to the annual collection – meaning all those who help finance the various services, whether it’s Mission Jeunesse or the Centre for Marriage and Family Life, Mr. Cardin explained.”

After the Eucharist, all were invited to the parish hall for a light informal meal, where each person received a rosary bearing the archbishop’s coat of arms. We could only say to one another; “see you next year!”

To contribute to the mission