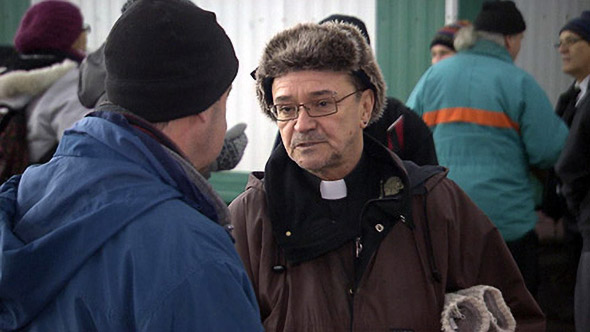 Notre-Dame-de-la-rue (Our Lady of the Street) reaches out to homeless people, bringing them comfort and a Church presence. Since its founding in 2013, Father Claude Paradis and his assistant, Kevin, joined by volunteers, go out to the street several times a week. They meet people where they are at and are primarily concerned with offering a spiritual presence and helping people to make sense out of what they are going through.

“I often say, and it is so true, that the people who are outside, are locked outside. They cannot come inside. They are locked outside, with no place to go. It is the opposite of what we might think,” says Father Claude Paradis, who founded Notre-Dame-de-la-rue (NDLR) and has been leading this one-of-a-kind experiment in Montreal for over two years.

First and foremost, this new diocesan venture has been given a lot of leeway. “It doesn’t cost much. My office is the street,” says Father Claude. “Then, there is the way that we receive people, which differs from other groups that offer support to the homeless.” There is no doubt that the work that they are doing responds to a vital need. However, Fr. Claude does caution that it can be difficult, and one rarely becomes fully comfortable working on the street.
“Some centres will say: ‘we do not put conditions on the people we welcome,’ except that they have a list of requirements: arriving at a certain hour, taking a shower, shaving and going to bed at a set hour. So, at the end of the day, their welcome isn’t all that unconditional.”

Besides, according to Fr. Claude, many homeless people refuse to go to a shelter, even when it is -30oC. “They feel free outside.” It is on the streets that Father Claude, his assistant Kevin, and a small team of volunteers, take the time to reach out to people. The task at hand is to give out a bit of food, some coffee, water and, above all else, be present to people who no longer have any self esteem.

“What is your real hunger? What does life mean to you?” asks Father Claude. He loves to draw parallels between this spiritual thirst and the Gospel of the Last Judgement, in the final pages of the Gospel of Matthew: “I was naked and you clothed me… I was hungry, and you fed me.”

“What does it mean, I was naked and you clothed me? What does the dignity of human life mean to you? People hunger to be someone to another person. People hunger to be loved by another person,” he explains. “Now, in 2016, this is what it means. To convey only the literal sense of the phrase is not enough: ‘I was naked’ now refers to the whole dignity of the human person. It is so much more than just handing someone on the street a t-shirt,” he maintains.

“The street is my parish”

Can spiritual thirst be quenched only in the comfort of a retreat house or in a well-kept church? Without a doubt, these places are perfect for that, but they are not accessible to the people that Father Claude and Kevin accompany. “What saddens Pope Francis the most about the clergy, according to his apostolic exhortation The Joy of the Gospel, is the lack of spirituality among the poor,” he stresses. It is a message that the Argentinian Pope addresses especially to clergy. Father Paradis believes it is a big problem, and he hopes to respond to this need with Notre-Dame-de-la-rue.

“Everyone needs spirituality. That is why we receive them as we do and take them just as they are. We try to walk with them a little, at their own pace. If they do not wish to go to a centre, we will walk with them in another way.” Father Paradis reminds us that most of the people he meets have been “bounced around” from one foster home to the another. When you live on the street, going to a centre means to go back to the social workers, the bureaucracy, the system, as we call it. People have lost trust because they were let down so many times.

Another aspect that also touches Father Claude is that he sometimes hears the confessions of those he helps. “At times, they are not fully aware of what a confession is, but they make one with me.” This priest has heard confessions in parks, but also in a drug house and a brothel. He admits that these are odd locations for confession but he wouldn’t trade places for anything in the world.

With Kevin, he is part of a team that goes out to the streets, mainly at night, to look for those men and women that will spend the night outside. With only a handful of volunteers, the encounters are often short: a look, a greeting, an offer of coffee or juice. The silence is a welcome break from a life where the asphalt, the crowds and the hazards of the weather are not very sociable friends. The people who call the street their home now are different. Times, have changed. We are no longer dealing with the good old drunk with a bottle of gin in a paper bag.

Today, the streets are as much home to youth from good families as they are to professionals that have lost everything because of gambling. There are also people who have fallen between the cracks of the health system, especially those with fragile mental health, not to mention those men and women for whom drugs have a devastating effect. In recent years, overdoses are increasing. The main problem is that all kinds of things are being sold. Drugs are cut with cleaners, solvents, etc. Nobody knows what the effects of these are, and there are destructive compounds that can’t even be detected by habitual users.

Father Claude often has deep conversations with these people, where the sadness of the day – sometimes the joys – are shared. Sometimes a secret is shared or a confession is heard, and the small team is off again to go to another strategic spot. In the winter, that may be a warm air vent in the city’s underground or, in the suffocating heat of the summer, a cool park. Depending on the mood and openness of the personnel, metro stations are places where a person can get shelter from the elements for a time, especially in the winter. However, do not count on being able to go to the ones downtown when there is a hockey game, a big show or other event. Everyone is cleared out, and their existence is swept under the proverbial rug…

Happily, Father Paradis is now in contact with the Maire of Montreal. He is thankful to Denis Coderre for the sincere openness that he seems to have for the homeless.

Hope is his watchword

Father Paradis doesn’t hide it; one day he would like his street flock to come to pray at Mass. The primary goal however is not to fill the churches. If the person finds meaning in their life and is able to do better, then that’s great! Like the young man he happened to meet at the Zoo in Saint-Félicien: from the streets of Montreal to waiting in line to buy a ticket with his wife and their two children. Yes, the words and actions of Father Claude do bear fruit. But they are not always as visible as they were in that case. Hope is his watchword.

To continue his work, Father Paradis needs the support of his bishop, of Kevin who is his much-needed sidekick, but also of volunteers that do not judge and do not seek to convert first. He needs people who are able to offer unconditional acceptance. He also needs financial help. Donations serve to support the two pillars, Kevin and Father Claude, but also to purchase objects of piety – a Notre-Dame-de-la-rue medal that is very popular – and to buy some food and coffee. “We do not replace the soup offered by other organizations. However, the work of looking within to search for meaning is better accomplished when you have had something to eat...”

Local Catholic priest sleeps in the streets for three weeks

Montreal priest turns homeless past into ministry of the street

From addiction to ordination: a homeless man's journey to priesthood

To make a donation:

or by credit card or Paypal

Truly I tell you, whatever you did for one of the least of these brothers and sisters of mine, you did for me.
(Matt. 25:40)