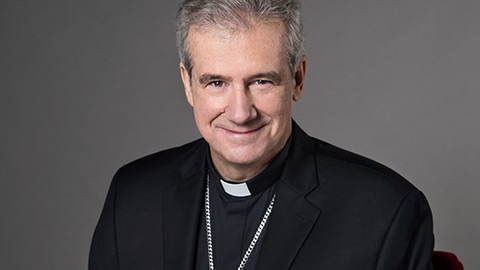 Most Reverend Christian Lépine is the tenth bishop and eighth archbishop of Montreal, since the establishment of the diocese in 1836.

Archbishop Lépine has had many years of experience as a pastor and teacher. Ordained a priest in 1983, at Saint-André-Apôtre Parish, he began his priestly ministry at Saint-Joseph-de-Mont-Royal before departing for Rome to study philosophy at the Gregorian University from 1986 to 1989. Upon his return to Montreal, he was appointed parish assistant at Notre-Dame-des-Neiges and pastor of Saint-Joseph-de-Mont-Royal. He ministered there until 1996, when he became the director of Jean-Claude Cardinal Turcotte's secretariat.

In 1998, he was called to Rome, where he worked for the Secretary of State and then for the Congregation for Divine Worship. In 2000, he returned to Montreal and was appointed director of the Grand Séminaire de Montréal, a mandate that he fulfilled up until 2006. From 2006 to 2012, he was pastor of Purification de la Bienheureuse-Vierge-Marie and Notre-Dame-des-Champs parishes. Throughout his various activities, Most Rev. Lépine taught philosophy and theology for some twenty years at the Grand Séminaire de Montréal.

Ordained a bishop on September 10, 2011 by Jean-Claude Cardinal Turcotte, he was appointed Episcopal Vicar to Family and Youth as well as Director of the Pastoral Liturgy Service. Finally, on March 20, 2012, Pope Benedict XVI appointed him archbishop of Montreal.

In this new Web series, Archbishop Christian Lépine goes to meet the various communities throughout the diocese.

See all videos of the series Christian the Pilgrim 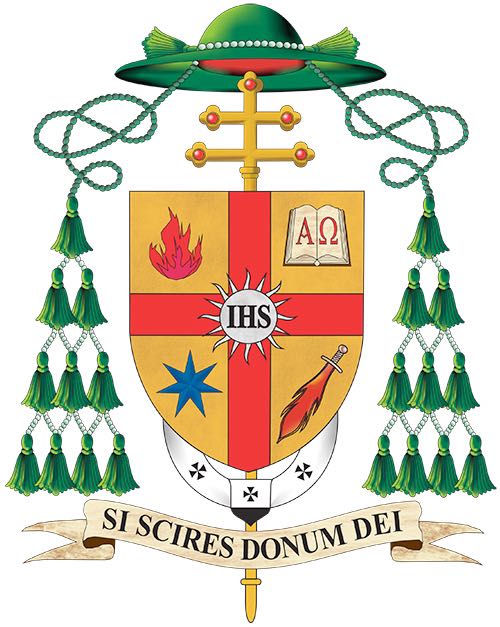 The coat of arms is the emblem of the bishop who expresses the message he wants to convey.

That of Monsignor Lépine is surmounted by a green hat, an ecclesiastical hat, from which hang on each side ten tassels indicating his rank of archbishop. It is placed on a processional double cross, also proper to the archbishop, and the pallium.

The pallium, a liturgical ornament, is a circular band of lambswool adorned with black crosses. The pallium evokes Jesus the Good Shepherd, who searches for the lost sheep, who carries it on his shoulders and gives his life for his sheep. This garment, symbol of communion with the successor of Peter, is conferred by the pope on the metropolitan archbishops as a sign of sharing the pastoral charge.

On the shield are the arms of the archbishop, a banner with the motto he has chosen as his program of life and that shows the spirit in which he wants to live his episcopate: "Si Scires Donum Dei" - If you knew the gift of God - taken from the Gospel of the Samaritan woman (Jn 4:10).

The shield with the golden background that signifies the Glory of God, the radiance of his Love, is superimposed by a red cross in reference to the passion and crucifixion of Jesus Christ whose center is a radiant sun charged with letters IHS, the monogram of Christ ("Jesushominumsalvator", Jesus, Savior of humanity), in reference to the presence of Jesus Christ in the Eucharist.

On each side of the red cross are found:

2020-03-20
Archbishop Christian Lépine's Pastoral Letter: Jesus is knocking at the door of our heart

2020-03-18
Archbishop Lépine's Pastoral Letter: Rediscovering the depths of our soul

2019-05-16
Pastoral Care: Sick and vulnerable people must be shown the most profound respect

2019-04-05
Sexual Abuse: Pastoral letter of the Archbishop of Montreal

2013-09-14
The Secular Government and Religion Duality