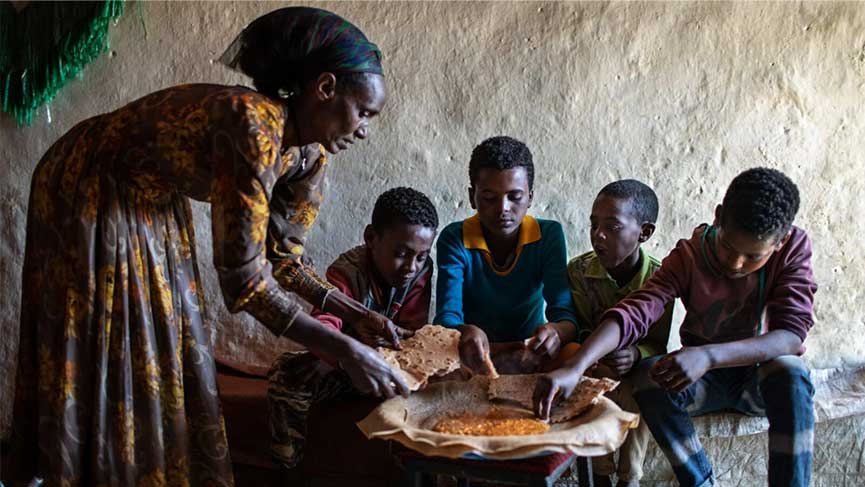 Prices of grain, cooking oil and other essentials are skyrocketing, as Ethiopians contend with ongoing drought, exacerbated by the inter-ethnic violence that gripped its northern provinces last year, as well as shortages brought about by the ongoing war between Russia and Ukraine. The United Nations reports Russia and Ukraine supply about 40 percent of Africa’s grain imports.

In Ethiopia’s Tigray region, where CNEWA will focus its funds, schools and banks remain closed, limiting access to money and services. Some report that businesses have been shut as fuel costs soar.

“We are greatly concerned about the ongoing plight of Ethiopians,” said Judith Poitevien, Interim National Director of CNEWA’s Ottawa-based office. “We hope Canadians will respond as they did so generously with our Ukrainian appeal. With the help of our many donors and friends, we are confident we will be able to help serve and support those in need in Ethiopia.”

Since the mid 1980’s, the east African country has struggled with environmental change, drought, war, revolution and civil strife. After a number of years of relative stability and economic growth, however, inter-ethnic violence has torn apart the country, especially in its northern provinces. Homes, places of worship and schools have been looted and heavily damaged. Reports continue of families living in fear of the unknown, as they face hunger and violence.

CNEWA’s partners in Ethiopia continue to plea for those most vulnerable, especially children, nursing mothers and the elderly.

“If we survive, we survive with gratitude for whatever assistance you give to us,” said Bishop Medhin of Adigrat in Ethiopia.

Learn more about CNEWA efforts in Ethiopia by visiting cnewa.ca or following the organization on Facebook (@CNEWACanada).

An agency of the Holy See, CNEWA works for, through and with Eastern churches throughout the Middle East, Northeast Africa, India and Eastern Europe, providing pastoral and humanitarian support. Founded by Pope Pius XI in 1926, CNEWA was incorporated in Canada as a registered charity by Canada Revenue Agency in 2003. For more information, visit cnewa.ca.