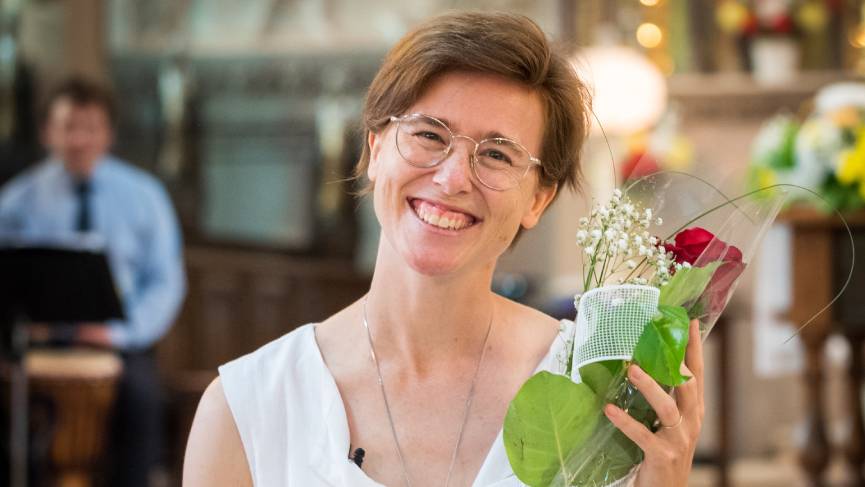 It’s been over a month since Violaine Paradis took her perpetual vows and became Sister Violaine of the Congrégation de Notre-Dame. Here she talks with us about her experiences during the ceremony of her profession of vows ‘‘for life’’ and what has happened in the month following that ‘‘great moment.’’

The deep joy and thankfulness to God are still with her from that day. The ceremony, which was ‘so her,’ was organized by the sisters, and also with much prayer, so that ‘‘every moment and every person involved had a meaning...‘’I could even say it was like a moment in eternity,’’ she exclaims, moved by the love she felt throughout the celebration.

‘‘To give myself to God forever was something so great, and I was there, I was ready with my heart full of joy that day and in the days leading up to it. My attention was completely focused on the Lord and on his cross, which spoke to me of my own, of our own cross, because this is my humanity, also.’’

God incarnate speaks to her more than anything else and guided her in the form of her profession. ‘‘I wanted to have it in a parish, so that it would be a commitment right in the world, in the reality of the people I’m being sent among and who I live with. Because I live in Hochelaga-Maisonneuve, and I’m quite active in the Centre Sud area.’’ She speaks about her desire to be compassionate, as Mother Marguerite Bourgeoys and Christ himself were, ‘‘heeding the cries of humankind in their own day.’’

‘‘I said ‘yes’ forever. There was before and now there’s after, so this is like a beginning.’’ Even though she has been frequenting the Congrégation de Notre-Dame for close to 12 years, Sister Violaine feels ‘‘something new’’ that she can’t quite put her finger on. ‘‘I experience my humanity more deeply, I feel it more. The more I allow grace to mold me like the human clay that I am, the more I can truly make contact with others,’’ she says. 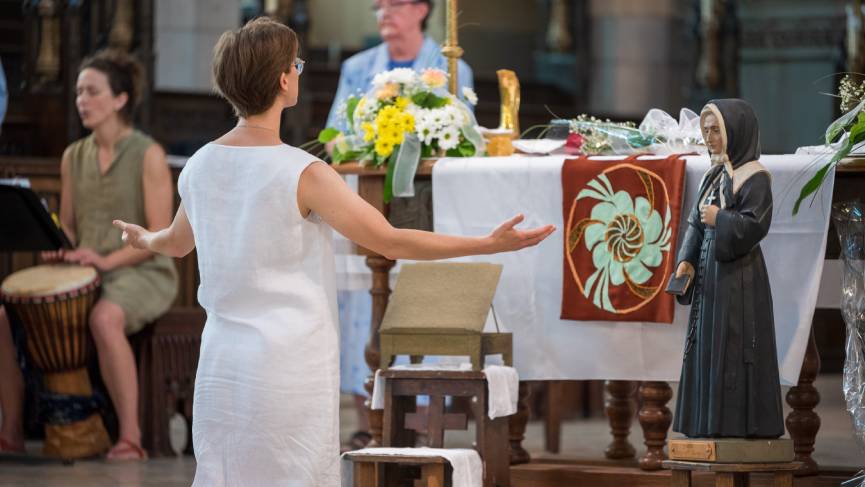 She was assisted in her preparations for this important moment by a thirty-day retreat, during which she practised the exercises of Saint Ignatius Loyola and took part in a General Chapter of the Congrégation de Notre-Dame. These two ‘‘profound experiences in Him and his congregation’’ provided her with an opportunity to enter into the ceremony of perpetual vows with a much broader view of what she was committing to - ‘‘for life.’’

The Trinity was central to the ceremony. The symbol is meaningful to her and inspired her to weave a Trinity mural representing the fundamental Love that is everywhere and in everything.

‘‘Bishop Alain Faubert talked about being a sister today. I’m still reflecting on that. I say to myself, ‘‘I’m Violaine and I’m a sister.’’ Before I used to say to myself, okay, people can call me Violaine! But now, if somebody calls me ‘‘Sister Violaine,’’ it’s somehow – Yes! I am a sister for everyone!’’

She was ‘‘floating on a cloud’’ for a time following the ceremony, and now she wants to deepen her commitment and ‘‘cast her anchor in Him,’’ all the while being careful to keep up her daily heart-to-heart with Him.’

‘‘Thankfulness’’ is very much with her, as is the Eucharist, which in fact means ‘Thanksgiving.’ Her entire ‘intensity’ gives thanks to God, for her life, for being Violaine and for being a sister. It is a joy and a grace for the Church of Montreal and for the world to have a sister like Sister Violaine given to us all.

Missionary Month 2021: Charity and Solidarity
The healthcare system pays tribute to a priest

The healthcare system pays tribute to a priest