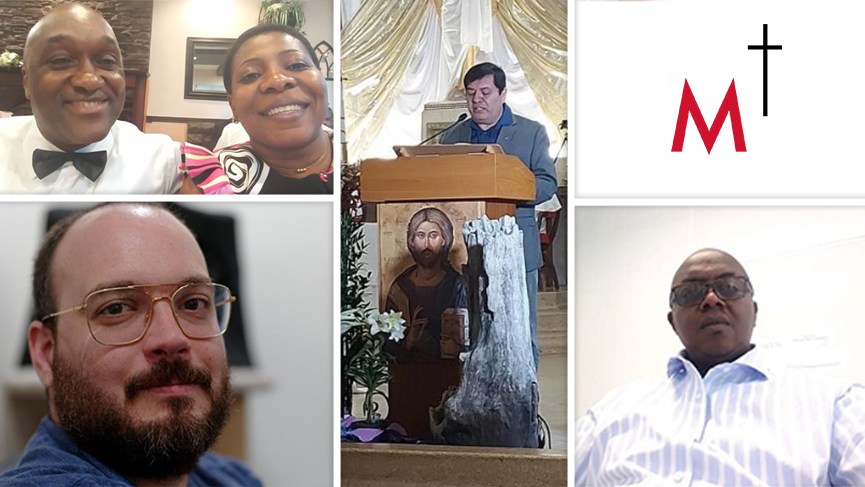 May 20 is the day that Fernando Castro, Marcellin Kanga, Diego Saavedra Renaud and Didier Abeto’s diaconal journey will begin with the rite of admission. They have a long road ahead of them, but they will be well provided with support and accompaniment and, of course, they will be attentive to what the Lord expects from them.

Fernando Castro and Azucena:
Fernando was born in Guatemala and has been settled in Montreal, together with his wife Azucena, for over 30 years. They have been married for 24 years and have two children, as well as being active as a couple in the lay Marists of Canada. In 2017, they began their diaconal journey when they embarked in the service of the Mision Catolica Hispana Santa Teresa de Avila, leading and coordinating both catechetical instruction and, since the pandemic, technological and evangelical work, while at the same time contributing to our Church’s social media outreach.
In 1999, while he was participating in the Montreal synod, Fernando felt personally moved to consider a calling to the diaconate. The seed had been planted, and time passed. In 2017, another person was talking to him about the vocation of the permanent diaconate, and then it clicked: Fernando began a serious process of discernment.
The term “deacon” means “servant,” and this resonates for Fernando, who explains, “A deacon becomes a permanent sign of service in the Church and in society.” He continues, “The reason that the deacon stands right next to the altar in the Mass is that he brings along with him the world, as an offering, into the heart of the Eucharist.”

Marcellin Kanga and his wife:
In spite of numerous hurdles, Marcellin Kanga’s heart is set on working towards the permanent diaconate. Having only recently immigrated to Canada from Côte d’Ivoire, he must first of all provide for the material needs and exigencies of his family, since “serving his family” is naturally the first priority. “But despite all that, I became a candidate and now four months later I’m part of the group entering the first year, and I really can’t say why.”
For Marcellin, “Becoming a deacon is a call, because everything is thanks to God.” He knows the road will be long, but he feels full of hope. He considers the rite of admission to be “the Lord reaching out his hand; it is the very first step into the unknown, but it is taken in faith.”

Diego Saavedra Renaud and Raphaëlle:
Diego has been a Lay Pastoral Associate in Côte-des-Neiges since 2018. He and his wife Raphaëlle have been married for seven years. He is currently on course to become a lay brother with the Dominicans. Having begun his faith journey as a Protestant, he converted to Catholicism in 2017 after “recognizing the real presence of the body and blood of Christ in the Eucharist.”
“I’ve always wanted to serve God, ever since I was a child. I enrolled in theological studies while I was Protestant with the intention of becoming a minister. Once I converted, I still wanted to continue on that path of service. The diaconate came up as an option, and I decided to sign up.”
For Diego, the Church’s mission means a social mission. “It is a form of evangelizing by example, which to me means the Church’s desire to go out of the temple and be among the People of God.”

Didier Abeto and Yolande:
Originally from Côte d’Ivoire and now a Canadian citizen since 2004, Didier is a social worker who provides in-home support through Laval social services. He and Yolande, his wife of soon to be eight years, have three children and are active in the Parc Extension parish community of Saint-Roch.
In the diaconal fraternities of Saint-Laurent and later Saint-Étienne, Didier found what he was seeking: “The fellowship of my colleagues enabled me to undertake this journey of discernment in a well-grounded way. They assisted me in the contemplation and actual recognition of this call I was hearing and that has always been part of me, a call I know is first and foremost divine.”
For Didier and his family, the ceremony of May 20, 2022, will mark “the beginning of an enthralling story filled with many joys and promises, and with the ultimate goal for me being the search for eternity. My Lord invites me to follow Him, to evolve through my service to others.”

Archbishop Christian Lépine will preside at the celebration to be held at the Cathedral of Montreal on May 20, 2022 at 7:30 p.m.

Beatification of Pauline Jaricot on May 22, 2022 in Lyon
Dans la rue: In the street or wherever you are, “It’s good that you’re alive.”

Dans la rue: In the street or wherever you are, “It’s good that you’re alive.”