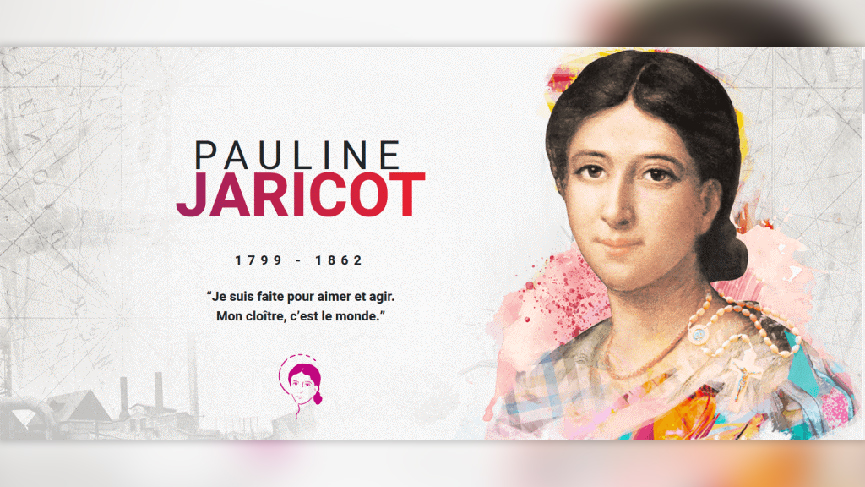 The Pontifical Mission Societies of Canada rejoice over the beatification of Pauline Jaricot on May 22, 2022 in Lyon

On May 22, 2022, Pauline Jaricot (1799–1862) will be beatified in her native city of Lyon (France) during a Eucharistic celebration presided over by the Prefect of the Congregation for the Evangelization of Peoples, Cardinal Luis Antonio Tagle.

This French laywoman is one of the most important missionary figures in the history of the Church. She founded the Pontifical Society for the Propagation of the Faith, which led to the creation of the worldwide network of Pontifical Mission Societies (PMS), thus contributing to a new missionary impetus for the Church of her time to the present day. Thanks to Pauline Jaricot, the PMS is the modern-day network at the service of the Pope, working to support the mission of the Church through prayer and charity, present in more than 120 countries including Canada.

“I have great admiration for this daring young woman who, driven by the Spirit, founded a society to spread the faith abroad. She succeeded in rekindling the flame of the baptized in her country through prayer, using the text messages of her time to help them grasp the abundance of the mysteries of the faith, explains Father Yoland Ouellet, OMI, National Director of PMS in French Canada. Faced with the great missionary challenges of our time, both in Canada and throughout the world, I believe it is necessary to rediscover the life of Pauline Jaricot, who serves as a model of missionary commitment for our time.”

A delegation from the PMS in Canada will travel to Lyon for the celebrations surrounding the beatification. The delegation will include Bishop Martin Laliberté, PMÉ, Bishop ponens of the PMS and Bishop of the Diocese of Trois-Rivières, Sister Micheline Marcoux, MIC, member of the Board of Directors of the PMS in French Canada, and Father Yoland Ouellet, O.M.I., National Director of the PMS. Father Ouellet will also participate in a round table discussion at an international symposium organized the day before the beatification in Lyon, France, during which he will elaborate on the impact Pauline Jaricot has on the PMS today in North America.

About PMS
The Pontifical Mission Societies support the world’s poorest dioceses and are present in some 120 countries across five continents. Under the responsibility of the Congregation for the Evangelization of Peoples (Vatican), they are today the worldwide network of prayer and charity for the mission of the Church, at the service of the Pope.

Catholic Bishops Welcome Announcement of Dates and Hub Cities for Papal Visit to Canada
The Rite of Admission: One Step at a Time towards the Permanent Diaconate

The Rite of Admission: One Step at a Time towards the Permanent Diaconate