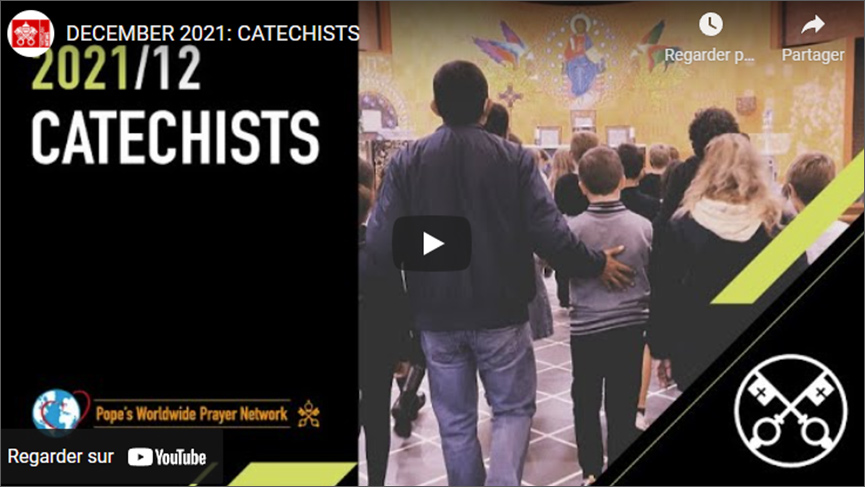 Pope Francis releases his prayer intention for the month of December, inviting everyone to pray for catechists, “summoned to announce the Word of God,” that they might “be its witnesses, with courage and creativity, and in the power of the Holy Spirit, with joy and much peace.”

“Catechists have an invaluable mission for the transmission and growth of the faith,” says Pope Francis in The Pope Video for December.

Each month, the Pope’s Worldwide Prayer Network prepares The Pope Video, in which the Holy Father reveals his special prayer intentions for that month.

For December 2021, the Pope is praying “for the catechists, summoned to announce the Word of God: may they be its witnesses, with courage and creativity and in the power of the Holy Spirit, with joy and much peace.”

A vocation and a mission

In his video message, Pope Francis says, “The lay ministry of catechist is a vocation; it’s a mission… It’s an entire way of being.” He said the Church needs “good catechists who are both companions and teachers.”

Earlier this year, Pope Francis formally restored the lay ministry of catechists with the Apostolic Letter Antiquum ministerium, issued “motu proprio,” or on his own initiative. In this month’s video, the Pope explains that even today, “in many dioceses, on many continents, evangelization is fundamentally in the hands of a catechist.”

Proclaiming the Gospel with their lives

So, he said, the Church needs “creative people who proclaim the Gospel, but who proclaim it neither with a mute nor with a loudspeaker, but rather with their life, with gentleness, with a new language, and opening new ways.”

An example of this “new language” for catechesis is seen in The Pope Video for December, which shows catechists and young people working together on a mural representing the washing of feet.

In his message, Pope Francis invites the faithful to “thank catechists for the interior enthusiasm with which they live this mission at the service of the Church.”

Fr Frédéric Fornos, S.J., International Director of the Pope’s Worldwide Prayer Network, commented on this month’s intention: “Francis dedicating this last message to catechists in the same year in which he instituted their lay ministry and in which the synodal journey began ‘as the pilgrim and missionary People of God’ is an eloquent gesture.”

In solidarity: the Church against violence against women
Christmas Celebrations 2021