Mystery of the Lascaux caves
25-11-2022
Growing participation: The release of the report 'Persecuted and Forgotten? 2020-22' shows the rise of persecution against Christians
25-11-2022
World Youth Day - Christ the King Vigil in Montreal
22-11-2022
CCCB President highlights papal visit to Canada during visit to Vatican
22-11-2022
Launch of the special 60th anniversary of the newsletter Passages: An issue to remember and an occasion to give thanks as we look forward to the future together!
22-11-2022 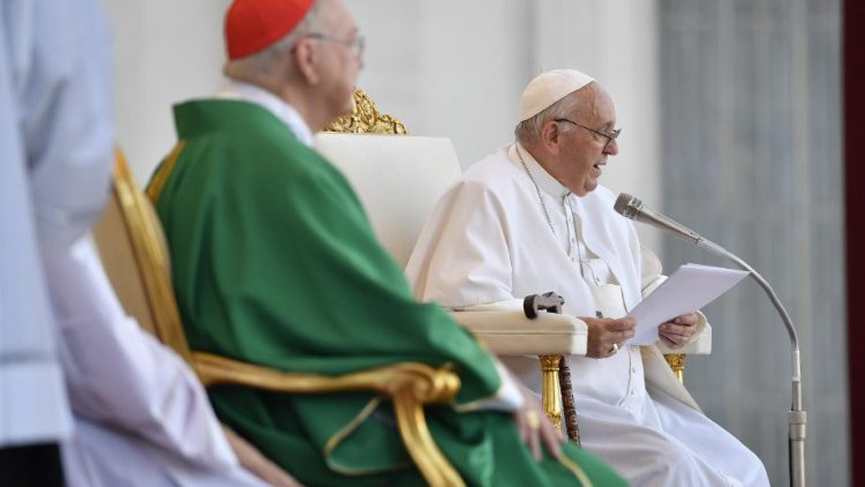 The 10th World Meeting of Families concludes in Rome with the celebration of the Holy Mass presided by Cardinal Kevin Farrell in the presence of Pope Francis. During the homily, the Pope notes that “the family is the first place where we learn to love.”

In a world poisoned by the toxins of selfishness, individualism, by a culture of indifference and waste, Pope Francis praised the beauty of the family and said “today more than ever” we feel compelled to defend it.

The Pope was speaking during the homily at a Mass of thanksgiving on Saturday at the end of the 10th World Meeting of Families that has been unfolding in the Vatican on the theme “Family Love: a Vocation and a Path to Holiness”.

The five-day event, organized by the Dicastery for Laity, Family and Life, concludes on Sunday when Pope Francis is scheduled to address families during the Angelus.

He described the moments of reflection and sharing, with their rich variety of experiences, plans and dreams, concerns and uncertainties, which have taken place during the World Meeting of Families, describing it as "a kind of vast constellation." He told all those present: “Fathers, mothers and children, grandparents, uncles and aunts, adults and children, young and old,” each bringing a different experience of family, but with one hope and prayer.

“May God bless and keep your families and all the families of the world.”

Pope Francis then reflected on the liturgical readings of the day that all shine light on different aspects of marital and family love.

Family is the place where we learn to love
In Saint Paul’s Letter to the Galatians, he said the Apostle tells us that the freedom given to us by God is completely directed to love, so that “through love you may become slaves of one another” (Gal. 5:13).
Turning to married couples, he praised their courageous decision to build a family and “to use your freedom not for yourselves, but to love the persons that God has put at your side."

Instead of living like little islands, he said, you became “servants of one another”.

That is how freedom is exercised in the family, Pope Francis explained, there are no “planets” or “satellites”, each travelling on its own orbit. The family is the place of encounter, of sharing, of going forth from ourselves in order to welcome others and stand beside them.

“The family is the first place where we learn to love.”

Even as we reaffirm this with profound conviction, he said, we know full well “that it is not always the case, for any number of reasons and a variety of situations.”

“And so, in praising the beauty of the family, we also feel compelled, today more than ever, to defend the family.  Let us not allow the family to be poisoned by the toxins of selfishness, individualism, today’s culture of indifference and waste, and as a result lose its very DNA, which is the spirit of acceptance and service.”

He said in a world in which everything seems chaotic and precarious, some parents fear “that children will not be able to find their way amid the complexity and confusion of our societies.” This fear, he added, makes some parents anxious and others overprotective.

“At times, it even ends up thwarting the desire to bring new lives into the world.”

But reflecting on the relationship between Elijah and Elisha in which God shows us that he has confidence in the new generation, Pope Francis said: “How important it is for parents to reflect on God’s way of acting!”

“God loves young people, but that does not mean that He preserves them from all risk, from every challenge and from all suffering.”

“God is not anxious and overprotective; on the contrary, He trusts young people and He calls each of them to scale the heights of life and of mission,” he said.

And he encouraged parents not to shield their children “from the slightest hardship and suffering, but to try to communicate to them a passion for life, to arouse in them the desire to discover their vocation and embrace the great mission that God has in mind for them.”

"Dear parents," he said, "if you help your children to discover and to accept their vocation, you will see that they too will be 'gripped' by this mission; and they will find the strength they need to confront and overcome the difficulties of life."

A never-ending journey
Finally, the Gospel of Luke tells us that “To follow Jesus means to set out on a never-ending “trip” with him through the events of life.

“How true this is for you married couples!”

The Pope said that our Christian vocation calls us to experience “marriage and family life as a mission, demonstrating fidelity and patience despite difficulties, moments of sadness and times of trial.”

Inevitably, he said, there will be moments of “resistance, opposition, rejection and misunderstanding born of human hearts,” but with the grace of Christ, we are called to “transform these into acceptance of others and gratuitous love.”

By accepting the call to marriage and family, couples set out on a trip, “without knowing beforehand where exactly it would lead, and what new situations, unexpected events and surprises would eventually lie in store,” he said.

“That is what it means to journey with the Lord. It is a lively, unpredictable and marvellous voyage of discovery.”

The Church was born of a family
Pope Francis concluded by inviting families to keep looking ahead “as Jesus always precedes us on the way in love and service; He encouraged them to share the joy of family love that must always be open, directed outwards, capable of ‘touching’ the weak and wounded, the frail in body and the frail in spirit, and all whom you meet along the way”; and by assuring them that the Church is with them and in them!

“For the Church was born of a family, the Holy Family of Nazareth, and is made up mostly of families.”

Catholic Bishops Welcome Announcement of Program for Papal Visit to Canada – July 24 – 29, 2022
OPEN LETTER: When we think we have nothing left to give

OPEN LETTER: When we think we have nothing left to give