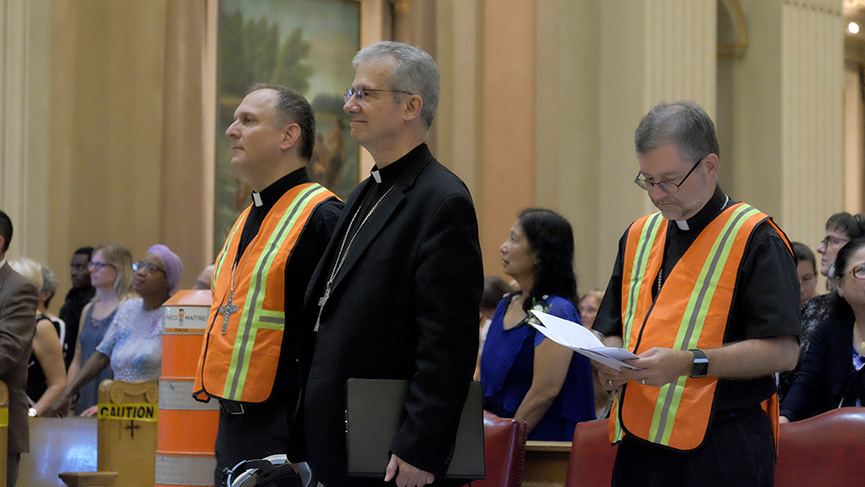 On September 14, 2018, Archbishop Lépine launched a great diocesan undertaking under the theme “Together in mission!”. The team spearheading this initiative has been working together over the course of the past year. As the pastoral year comes to an end, here is an update of progress to date.

The Launch of a Great Undertaking

Since the publication of Pope Francis’s Apostolic Exhortation, The Joy of the Gospel, in 2013, the entire Church in the province of Quebec is bubbling over with excitement and the Diocese of Montreal is no exception. Answering the Pope’s request of a “Missionary shift” and being convinced that our diocesan Church must attempt to it, Archbishop Lépine launched a great diocesan undertaking last September at the Cathedral with these opening words: “Evangelizing means evangelizing the poor. If we do not evangelize the poor, we do not evangelize at all! He also said that we must not wait to be ready to go off unto a mission, because it is through the mission itself that we learn and renew. Urging the congregation to get together to make our Church a place where people of this community can feel Christ’s tenderness and closeness, he used the watchword: “Together in mission.”

The Response from Parishes

Since that day, even though it is not yet visible, a solid groundwork has been developing all through the diocesan Church, the curia and parishes. Community leaders from the same region are indeed gathering under the designation “deanery”. These groupings include priests, sometimes their pastoral teams and at times even some of their closest parish collaborators. In addition to answering the watchword, the deaneries’ meetings allow neighbouring parishes to meet and to know each other better, to start with. Aiming to go further, these meetings intend to mobilize progressively pastoral architects and congregations to create forums for reflection and work, with a strong desire to identify pioneering initiatives to increase the Church’s missionary presence near peripheries, close to the preoccupations of those who are not parishes’ “regulars”, close to neighbourhoods’ concerns in our cities.

The Archbishop expressed to everyone his wish to see the Church of Montreal transform itself into a Church going forth. He showed to us the path to follow to become a missionary Church. Together, as we pray and “see – discern – serve” (an adaptation of See-Judge-Act), we will succeed. The Archbishop cannot determine for the entire diocese the missionary efforts needing to be undertaken. The size of the diocese, the diversity of its inhabitants, and the multitude of individual, familial and collective problems require local and targeted measures. This is the reason why the people involved in parishes are at work, relying on ecclesial structures (parishes, deaneries) to reach out to civic realities: our city neighbourhoods. Indeed, who occupies the best place to know and act on practical issues touching individuals, if not the parishioners from these neighbourhoods, those neighbours close to the ones living in peripheries? Our Church’s presence will be one of closeness in the daily reality of people, not through ecclesial structures in which few people find their way about.

To support this great undertaking and the people’s efforts in parishes, the Archbishop of Montreal has already taken several measures:

The Challenges facing us

To be truly close to individuals’ lives through diversity and to develop local missionary work, the Church must turn to the richness of its own diversity. Until today, French, English and cultural Christian communities have cohabited without really knowing each other. There is a need for new processes to remove those solitudes and to work together within neighbourhoods, as these reflect a multilinguistic cultural diversity. Here are examples: grocery stores and banks. Aren’t they not located in the heart of life in neighbourhoods, without language and cultural distinctions? Is it not the same for social issues touching particularly some neighbourhoods, such as gentrification, racial tensions, deficient urban development, and so forth?

Another challenge, and not the least, is mobilizing congregants in such ways to obtain more than simply a small number of devoted parishioners to accomplish the work. Nowadays, faith is perceived from a personal perspective, as something intimate lived privately. Christians do not bear witness to the reasons of their involvement when fulfilling the needs of parishes, or doing charitable or secular work. A missionary Church is the entire people of God walking like Christ among the people, easing the suffering and taking care of everyone “so that they may have life, and have it abundantly”.

In the Near Future…

Understandably, this diocesan undertaking is an enormous effort to go beyond our habits and ecclesial structures to become the presence of God where individuals are. It is not about giving up the enthusiasm we put in our current pastoral initiatives, but rather reaching out to all individuals not finding the path leading to us.

Carrying on in the first phase (“to see”), taken from the “see – discern – serve” steps presented by our archbishop, the people involved in parishes gather and get to know each other. Through a true exercise leading to a better understanding of local realities, they will try to appoint every person of good will, as part of this exercise. They will go as far as to attempt to manifest their interest in people’s lives by reaching out to the neighbouring people and organizations unrelated to the Church. We may have no knowledge of their names and terms yet, but we can expect that local meetings, forums and dialogue tables will be held under the guidance of the Holy Spirit to discern the avenues of a Church’s presence being relevant, loving and acting in the practical reality of the people living within communities.

In  a few months, a new section of the diocesan website will be dedicated to the “Missionary shift”. Explanations regarding this project with the next steps and the latest information on this undertaking will then be made available to you.