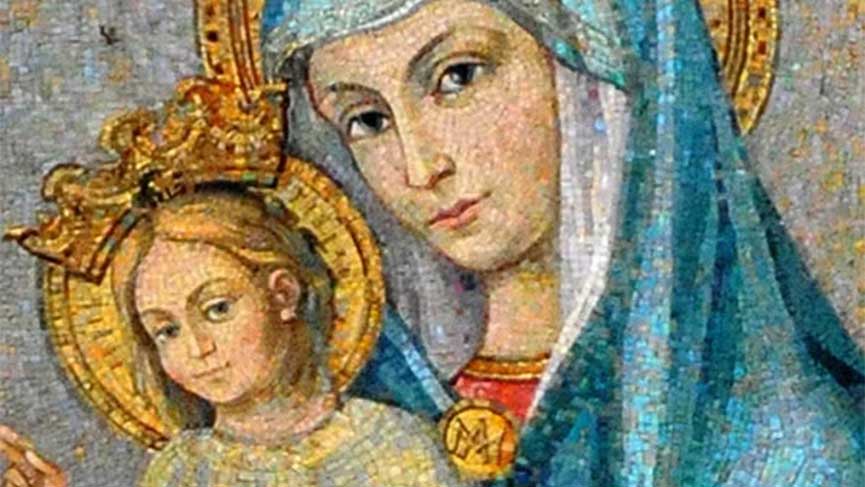 Some reflections that can assist our prayer on the Solemnity of the Immaculate Conception.

“O MARY, glory of the world, daughter of the eternal Light, whom your Son preserved from all stain of sin.”[1] Today, together with the whole Church, we celebrate the holiness of Mary, the woman from Nazareth who received all the gifts and fruits of the Holy Spirit. From the earliest times, Christian writers referred to our Lady as the “new Eve,” recognizing that she was associated in a special way with a “new creation” of the world, the work of redemption. Pope Pius IX defined the dogma of the Immaculate Conception of Mary on 8 December 1854 in the Bull Ineffabilis Deus.

The central formula of the document, where the faith of the Church is clearly defined, says: “the doctrine which holds that the most Blessed Virgin Mary, in the first instance of her conception, by a singular grace and privilege granted by Almighty God, in view of the merits of Jesus Christ, the Savior of the human race, was preserved free from all stain of original sin, is a doctrine revealed by God and therefore to be believed firmly and constantly by all the faithful.” [2]

The first reading of the Mass presents one of the biblical texts that the Pope cites in the Bull: the story of the expulsion from paradise of our first parents, after original sin. However, the narration also includes an announcement filled with hope. The Lord addresses the tempter serpent saying: I will put enmity between you and the woman, and between your seed and her seed; he shall bruise your head, and you shall bruise his heel (Gen 3:15). This passage is called the Protoevangelium because it is the first announcement of our salvation.

Saint John Paul II points out that the text of Genesis “has inspired many representations of the Immaculate One, who crushes the head of the serpent beneath her foot . . . This translation does not correspond to the Hebraic text, in which the one who steps on the serpent’s head is not the woman, but her offspring, her descendants. That text, thus, does not attribute to Mary, but to her Son the victory over Satan. Nevertheless, given that the biblical conception establishes a profound solidarity between the progenitor and the descendants, it is coherent with the original sense of the passage to say that the Immaculate One crushes the head of the serpent, not by her own power, but through that of her Son.”[3]

THE PREFACE of the Mass considers the mystery that unites Mary with the origin of the Church: “For you preserved the most Blessed Virgin Mary from all stain of original sin, so that in her, endowed with the rich fullness of your grace, you might prepare a worthy Mother for your Son and signify the beginning of the Church, his beautiful Bride without spot or wrinkle.”[4] Mary’s Immaculate Conception, the moment in history that we joyfully recall today, inaugurates the time of the Church, which is our time.

All of us are called to imitate the holiness of our Mother. However, when considering this invitation, we may have “a lurking suspicion that a person who does not sin must really be basically boring and that something is missing from their life: the dramatic dimension of being autonomous.”[5] Although we know it isn’t true, we may be haunted by the thought that, in a certain sense, we will only become fully human by experiencing the tension that seems to be absent in our Lady’s life.

“If we look, however, at the world that surrounds us we can see that this is not so; in other words, that evil is always poisonous; it does not uplift human beings but degrades and humiliates them. It does not make them any greater, purer or wealthier, but harms and lessens them. This is something we should indeed learn on the day of the Immaculate Conception: the person who abandons himself totally in God's hands does not become God’s puppet, a boring ‘yes man’; he does not lose his freedom. Only the person who entrusts himself totally to God finds true freedom, the great, creative immensity of the freedom of good.”[6] Ultimately, the person who follows in the footsteps of our Mother finds his true self and can draw closer to each person.

This is God’s dream that we see in today’s Gospel, when Mary receives the announcement of her vocation (cf. Lk 1:26-38). And it is also an expression of God’s mysterious plan for each person. As Saint Paul says in the second reading of the Mass: He chose us in [Christ] before the foundation of the world, that we should be holy and blameless before him (Eph 1:4).

THE ANGEL came to her and said, “Hail, full of grace, the Lord is with you!” (Lk 1:28). The angel encourages Mary to rejoice in God’s special favor shown to her. Knowing God’s plans brings us joy. Taking part in them is the path to happiness both on earth and in heaven. The angelic greeting has two essential parts: the invitation to rejoice, since the Son of God who was foretold in Genesis is about to become incarnate; and the statement of the fullness of grace found in Mary. It is revealed to us that our Lady is completely holy, manifested in the overflowing fullness of her faith, hope and charity.

We too want to be filled with faith and live according to God’s plans. We would like to have a faith that never wavers and that manifests itself in a fruitful way when suffering and difficulties accompany us. For we know that “if God exalted his Mother, it is equally true that he did not spare her pain, exhaustion in her work or trials of her faith.”[7] We also want to live imbued with hope, since we are certain that we are sharing in our Redeemer’s victory. Just as the apostles’ hope was rekindled by seeing Jesus glorified on Tabor, so we too, on contemplating the woman full of grace, are filled with optimism in our mission, also when humanly we go through more trying moments. “In the most difficult moments, Mary, the Mother Jesus gave to all of us, will always support our steps; she will always say to our hearts: ‘Arise! Look forward, look to the horizon,’ because she is the Mother of Hope.”[8]

Finally, we ask Mary to obtain for us from her Son Jesus a greater charity in order to intensify our love for God and for all men and women. Being children of such a good Mother will make us resemble her Son, who passed through the world doing good and enkindling in hearts the ever new and effective light of divine grace.

[1] Liturgy of the Hours, Solemnity of the Immaculate Conception, Lauds Hymn.

[4] Preface, Mass on the Solemnity of the Immaculate Conception of Mary.

Upcoming stages in 2022-2023 for our diocesan work of synodal and missionary transformation
Christians are already thanking you: Shukran!

Christians are already thanking you: Shukran!