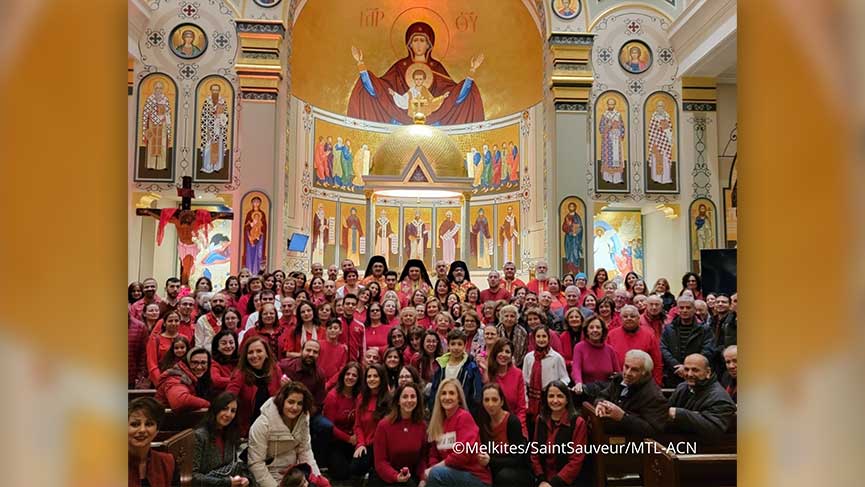 “More and more parishes, cathedrals, schools and groups are participating to the Red Wednesday in Canada, which is excellent news,” says Marie-Claude Lalonde, National Director of Aid to the Church in Need Canada. “And it’s good news because, unfortunately, religious persecution against Christians has never been more intense,” she deplores.

Available today on the Canadian website of the Pontifical Charity, the abridged report of Persecuted and Forgotten? A Report on Christians Oppressed for their Faith 2020-22 is anything but encouraging. (acn-canada.org/publications).

According to the main findings, in 75% of the countries under study (24 in all), oppression and persecution of Christians has increased. In Africa, “genocidal violence” is being perpetrated by non-governmental militants, including jihadists. In the Middle East, and despite the defeats of the Islamic State in Iraq and Syria, economic crises and the fact that in some of the states, Christians are treated as second-class citizens, threatens the very survival of these historic communities. For many Christians, emigration becomes the only way out. Finally, in Asia, authoritarian states are largely responsible for this diminution of the fundamental right to religious freedom. North Korea, the sad champion in this regard, continues its systematic persecution, with reports of murders, infanticide, forced abortions and slavery of Christians on the rise. Persecution ‘’is judged to have reached the threshold for genocide, “ indicates the report.

“I invite Canadians to consult the outline of the report, and, I invite the Catholic Christian communities to become aware of the situation of their brothers and sisters in the faith. We simply cannot remain silent on this issue any longer. Year after year, and despite being enshrined in Article 18 of the Universal Declaration of Human Rights, religious freedom tends to diminish, to become a marginal point on the international agenda. And Christians in many countries are paying the price. When will there be a sufficient international reaction,” says Marie-Claude Lalonde.

Red Wednesday: More Important Than Ever

In Canada in 2022, Red Wednesday is back on track after the relaxation of sanitary measures related to COVID-19. The number of events continues to grow. One of the new participants is the parish of St. Sauveur Cathedral in Montreal, which brings together Greek-Melkite Catholics. “Red Wednesday is about us the most,Bishop Milad El Jawich, Eparchial Bishop of the Greek Melkite Catholics of Canada, based in Montreal, told ACN. “We, the Christians of the East, are the sons and daughters of the martyrs. Our ancestors, our fathers and mothers, our brothers and sisters and even ourselves, up to the present day, do not cease to repeat with the Apostle: for Jesus’ sake we are put to death all day long. We are the eternal bearers of the red!.” The parishioners of the cathedral gathered on November 15 and had a moment of prayer followed by Mass.

As in past years, students from Notre Dame Catholic High School in Carleton-Place (just outside Ottawa) participated by wearing red t-shirts that recalled the number of persecuted Christians in the world. Several buildings were also illuminated in red, including the diocesan building in Valleyfield, St. Mary’s Cathedral in Calgary, the Basilica of Notre-Dame-du-Cap in Trois-Rivières and the dome of St. Joseph’s Oratory in Montreal. “Thank you to everyone who participated in Red Wednesday, we look forward to counting on you again next year. Year after year, through prayer and awareness, we will certainly succeed in alerting even more people to the problem of the persecution of Christians,” concluded Mrs. Lalonde.

The Persecuted and Forgotten? 2020-22 report can be read and downloaded at: acn-canada.org/publications.

Mystery of the Lascaux caves