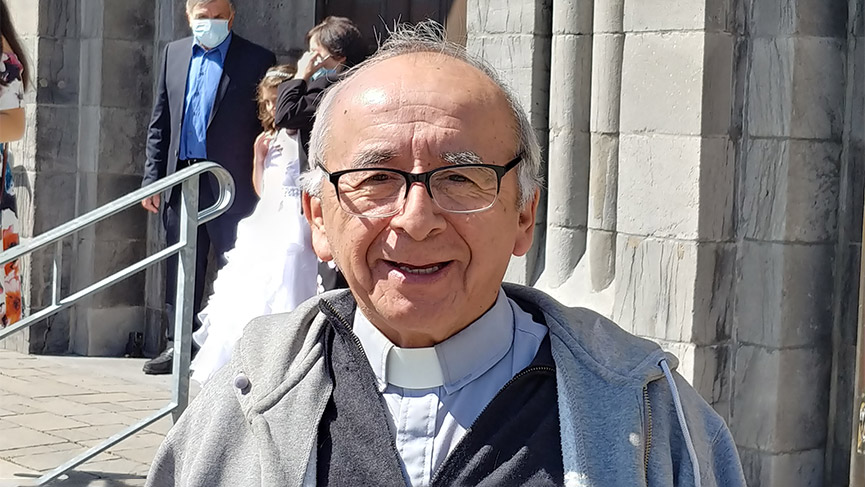 We are gradually becoming accustomed to hearing about COVID, somewhat like the mission of the Church. Fr. Raul Garcia, a 74-year-old priest serving as assistant at Rosemont’s Saint-Esprit Parish, reminds us, through his example, that going to the peripheries and touching people’s lives like a flame of love is what’s most needed, amid COVID or not!

Father Garcia is actively involved in his Rosemont neighbourhood. In particular, he works with the elderly in palliative care. He knows them and even succeeds in bonding with those who do not necessarily believe in God: “It’s not just about celebrating mass… It’s to witness the joy and struggles of those people. They have many questions regarding death, regarding sickness.”

Praying and Guiding… By Videoconference!

His “place of mission”, as he calls it, has mainly been with elderly people during the pandemic since he is responsible for two retirement homes linked to the Saint-Esprit-de-Rosemont parish.  Even if health measures kept him from going inside the residences, he would call them on their cell and would wave to them through the window.

The ones who were suffering more and couldn’t go out also had to be considered: “A man with cancer, a woman who had lost her husband… We really had to be present and listen. This man who had cancer, we really had to be there for him! By Skype or videoconference, I communicated with him, with his wife. We also did the anointing of the sick prayer.”

For this priest, the missionary involvement goes well beyond the parish. Of course, in his eyes, pastoral ministry is very important to everyone who comes to church, but “what do we do about the ones who don’t come?” That’s when he brings up the importance to go and meet people, to go where people are, to choose a place of mission and to get involved: “We have to be a flame of love, because people, really, need love, need to know better who Jesus is”.

Father Garcia makes a beautiful reflection on this call to mission which Pope Francis and the Church in general talk about: “Often, we say we prioritize the mission. But the mission cannot be prioritized, you take part in the mission. It’s the core principle, but as we say, we learn to do by doing. In pastoral ministry, you work with people who believe. When you are involved in missionary work, you work with those who don’t believe”. Obviously, all Christians are missionaries according to Raul Garcia: “We need everything!”, he says with kindness.

Jesus in His Neighbourhood

For the 74-year-old priest, getting involved in his neighbourhood is vital: “There are different places of mission, and you have to target them, like Jesus used to do.  ” His presence as a priest calls out to people, who are often surprised to see him working hands-on. But ultimately, he simply wishes to be at the heart of people’s lives and be there for those who need accompaniment.

Raul Garcia works with various committees, and during the pandemic, he participated in finding solutions so that the community life could go on,  despite the restrictions. For example, day camps: “As Christians, we bring life. Some people are suffering, and it is important to be a flame of love, to help them move from suffering to joy.”

“God is with us. God never abandons anyone. With this pandemic, I ask myself, how can we develop this ‘Together on a mission’”? It is a great reminder of the pastoral’s theme for the year, which is coming to an end, but it keeps us motivated.

“Jesus also shone in his neighbourhood,” he says to conclude. It’s our turn to be a flame of love after Christ.

Each one has a name: Mass for the unclaimed deceased
Pope at Angelus: forgiveness and mercy helps avoid suffering, wars...