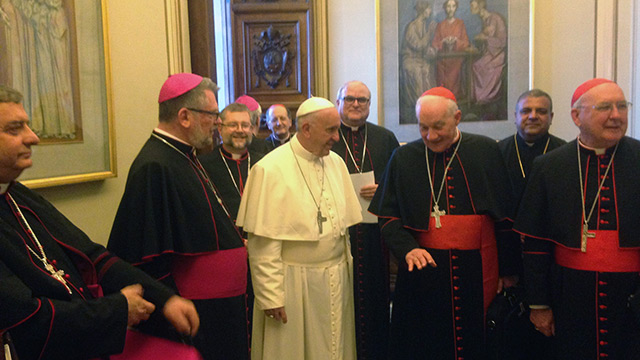 On Thursday, May 4, the bishops of Quebec, on their "ad limina apostolorum" visit in Rome, participated in a three-hour meeting with Pope Francis and collaborators from the Roman Curia.

This meeting is part of a series of initiatives undertaken by the Pope to enrich the bonds of communion, sharing, and mutual listening between the diocesan bishops, the Pope and the Roman Curia.

The meeting was carried out in three parts. Following a moment of prayer, Most Reverend Paul Lortie, Bishop of Mont-Laurier and President of the AQCB, Most Reverend Christian Lépine, Archbishop of Montreal, and Gérald Cyprien Cardinal Lacroix, Archbishop of Quebec, briefly shared the reality of the Church in Quebec as well as the pastoral challenges of today's mission.

In the second part of the meeting, the bishops of Quebec shared their personal experiences by speaking of their challenges, expectations and hopes.  Among the topics discussed, the bishops mentioned the following: transmitting the faith in today's modern Quebec, the challenges in human and financial resources that Christian communities are faced with, the importance of the role of lay men and women is in the Church and in this world, and the Church's participation in society's debates. The Pope's collaborators, members of various sectors of Church life, were each invited to give their personal observations, according to their jurisdiction.

Finally, to conclude the meeting, Pope Francis spoke words of encouragement to the bishops of Quebec, urging courage and boldness in the pastorship of their respective dioceses. He used expressions such as: "Church in Quebec, rise up! Go and listen! Never forget that the Risen Lord is always with us!"

The bishops of Quebec were overjoyed to have had the opportunity to take part in such a meeting. They greatly appreciated Pope Francis' solicitude and the hope that he exuded.

The President of the Assembly of Quebec Catholic Bishops, Bishop Paul Lortie, shared his reaction at the end of the meeting: "A fresh impetus for our Assembly in a climate of listening, sharing and simplicity in truth."

“Hidden child” believes in power of love
Flooding: Message from the Bishops of Quebec

Flooding: Message from the Bishops of Quebec