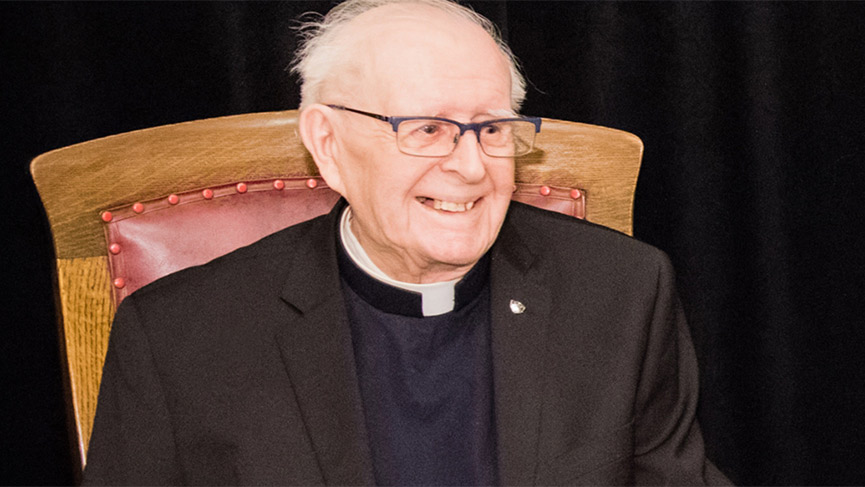 The diocese received the following text from Fr. Benoît-Marc Boyer, Ad. E. and decided to publish it as a diocesan tribute to Fr. Marcel Lalonde, C.S.C., rector of Saint Joseph's Oratory of Mount-Royal from 1962 to 1992, who recently passed away. To the entire community of the Oratory and of the Congregation of Holy Cross, we offer our condolences and our prayers.

Despite our age difference, please allow me to greet you  by your first name.

I knew you as a child, you were the rector of St. Joseph's Oratory. You were the determined leader of one of the most visited tourist sites in Montreal, with a million visits a year at the time. I sang there as a ‘Petit Chanteur’ and secretly admired the man that you were.

Appointed rector in 1962, at the dawn of the upheavals of the Second Vatican Council, you skillfully transformed the liturgy and adapted it to these grandiose places. When Brother André was beatified in 1982, not only did you lead the Montreal delegation to Rome for the occasion, but you also orchestrated all the festivities held at the Oratory to mark the occasion. No wonder that when Jean-Claude Turcotte, who was to become Archbishop and then Cardinal, envisioned a celebration with 50,000 young people and John Paul II at the Olympic Stadium in 1984, he immediately thought of you. I was there, and I remember with emotion the tears shared by so many young people in front of the beauty of the choreographies and the inspiring messages inviting us to build a beautiful, just, open world.

You also had an artistic soul. Could it have been otherwise to have the audacity to invite Offenbach to give a concert at the Oratory that was so memorable? You also had a special concern for the choir of the Petits Chanteurs du Mont-Royal (PCMR). It was you who was at the helm with the Montreal Olympic Games, or when we sang with Luciano Pavarotti at the parish of Notre-Dame in Montreal in a Christmas concert that went down in history. Then there were the first growing pains of the international influence of the PCMR with Venezuela and the trips that would multiply after your departure as Rector. Sensitive to the needs of such a large choir, you went through the administrative labyrinths to offer it a functional and pleasant working pavilion that had just been inaugurated after your departure in 1992.

In terms of design and urban architecture, you knew how to develop beauty. It is under your initiative that the interior of the Oratory that leads to the majestic basilica will be completed. At a time when it was almost unheard of in the field of design and urban architecture, you endowed the Oratory with a play of lights that illuminating its dome, making it visible in the night as far away as the suburbs of Montreal. You improved the gardens, which are still to this day a place of calm and peace in the heart of the city that so many people appreciate. You upgraded a place that remains to this day, except of course in times of confinement, one of the most (the most?) visited by tourists, with visits numbering in the millions.

On a more personal note, as PCMR, I took the liberty of sending you a congratulatory note when you received the Pro Ecclesia et Pontifice medal from the Vatican. I believe, with the emotion transmitted in your reply, that you were surprised and touched that a young PCMR knew this and took the time to underscore it. You would return the favour by coming to concelebrate my priestly ordination on the hot morning of May '94.

I believe I never told you this.   That I became a priest one day, it was inspired by your testimony as a man of both faith and action.  For me, both of these are brought together by you in the present reality of our world. And seeing you in action, allowed me to know that it was possible to do the same, that it was worth it.

Thank you, Marcel. For all the good you've done. For your contribution to the arts, to urban design and for your unshakeable faith in Beauty that leads to Greater, Farther, Better.

In a word, farewell. The hope we share allows me to dream of finding you one day.