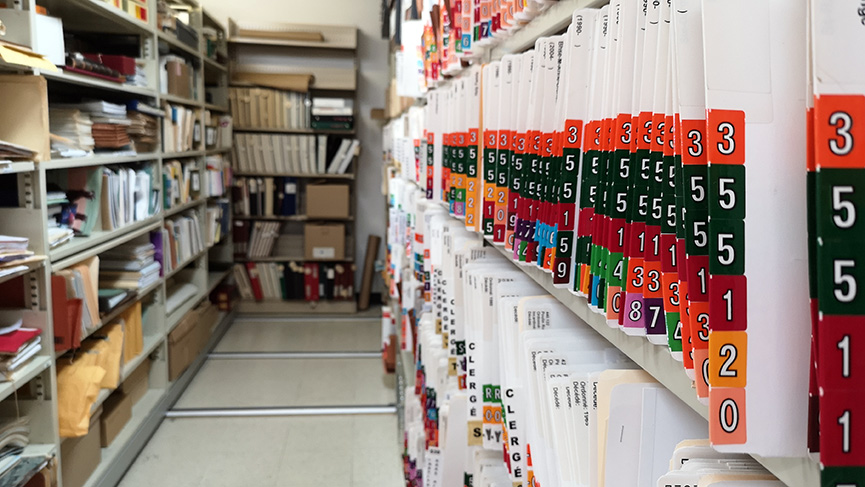 A part of the Archdiocese of Montreal's archives.

Five Quebec dioceses have commissioned retired Superior Court justice Anne-Marie Trahan to conduct an external audit of their archives to assess the number and the nature of well-founded allegations of sexual abuse of minors made against Catholic clergy and mandated lay personnel from 1950 to the present.

In order to shed light on past practices and inspired by similar initiatives undertaken elsewhere in the world, Archbishop Christian Lépine approached Ms. Anne-Marie Trahan and held discussions with the four dioceses that form the ecclesiastical province of Montreal. The eminent judge finalized details of the mandate this month and will begin the audit in September 2019, after putting the appropriate investigative mechanism in place and assembling the required resources, including engaging any specialists she deems essential. While no time limit has been set for completing the audit, it is expected to take between 18 to 24 months.

The former judge of the Superior Court of Quebec accepted the mandate after being assured by the ecclesial authorities involved that she would have full access to all pertinent files for the nearly 70-year period, and that the conclusions of the statistical report will be published once the process is completed. This analysis focuses exclusively on individuals working in diocesan parishes, services and institutions.

“We all wish to prioritize transparency and to get to the bottom of things in the search for truth,” says Archbishop Lépine.

The report to be made public will present an aggregate statistical overview of sexual abuse allegations involving minors that occurred in the five dioceses combined, while respecting the requirements under Quebec’s privacy laws.

Father Grou is alive and well
"Christ is alive": Synthesis of the Apostolic Exhortation

"Christ is alive": Synthesis of the Apostolic Exhortation