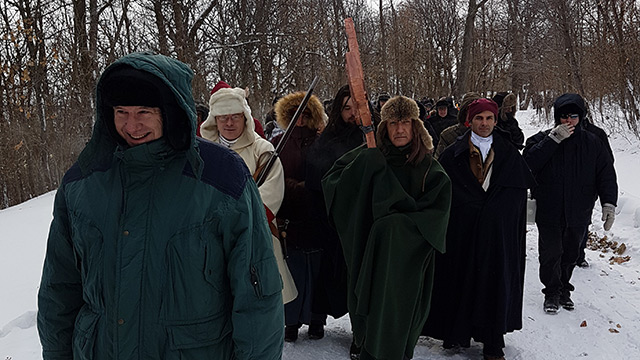 Paul de Chomedey and company return 375 years later to commemorate the erecting of a cross on Mount Royal in thanksgiving for saving Ville Marie from flooding.

It's doubtful that Montreal would be celebrating 375 years of history today had flood waters not receded in December 1642. Jeanne Mance and Paul de Chomedey, Sieur de Maisonneuve - the city's co-founders - knew as much and sought Heaven's intervention to ward off a certain death blow during their first winter.

Maisonneuve made a public pledge to erect a cross on Mount Royal should Divine Providence spare Ville Marie. When the waters lapping on the threshold of their rudimentary lodgings started to recede on Christmas Eve, they knew the colony, its provisions and the mission for which Ville Marie was founded would survive.

True to his word, on Jan. 6, 1643, Maisonneuve shouldered a cross and forged up a snowy path with a band of colonists to erect it on the mountainside.

Fast forward 375 years, and another band of believers, led by Archbishop Christian Lépine, gathered before noon to commemorate that act of thanksgiving. In -20 C temperatures, with a wind chill of about -30 C, more than 200 diocesan leaders and pastoral workers assembled Jan. 6 at Chalet du Mont-Royal to re-enact the pilgrimage to the summit. They were joined by Maisonneuve, Jeanne Mance and their retinue (portrayed by local actors) for the 30-minute walk to the summit and back, which included a short prayer service beneath the iconic 103-foot steel cross towering over the city that recalls the event.

There, the Archbishop of Montreal recalled the courage, faith and forbearance of the city's founders in establishing a missionary settlement where Europeans and Indigenous Peoples could live harmoniously together.

This is part of the city's DNA, Lépine had stated earlier in his opening remarks at the nearby chalet.

Ville Marie was founded solely to make Jesus Christ known to Indigenous peoples and to live the Gospel imperative that all should live harmoniously together, the archbishop said during his address at the chalet.

Montreal "is French in its origins, in its initiatives," he stated, but its raison d'être was to be a city "with an inclusive vision where Indigenous and French people were to live together. It's in our genetic code, which is why we, as a diocese, are committed to 'living together' harmoniously."

In addition to evangelization and living harmoniously together, Montreal's third commission, Lépine pointed out, was to "love the poor as Christ loved them."

Personified by Jeanne Mance, known as North America's first lay nurse, "love and care of the poor and of all vulnerable people has always been part of our mission." The poor must be served regardless of their beliefs, their circumstances and without judgment, he underlined.

The 375th anniversary of Montreal's founding and the subsequent anniversaries that follow offer an opportunity "not only to explore our roots," the archbishop concluded, "but to be inspired by the values that motivated the founders of Ville Marie and to respond to the thirst, which only Jesus Christ can satisfy, that resides in the hearts of all."

World Day of Migrants and Refugees 2018
Diocesan Centre for Marriage, Life and Family