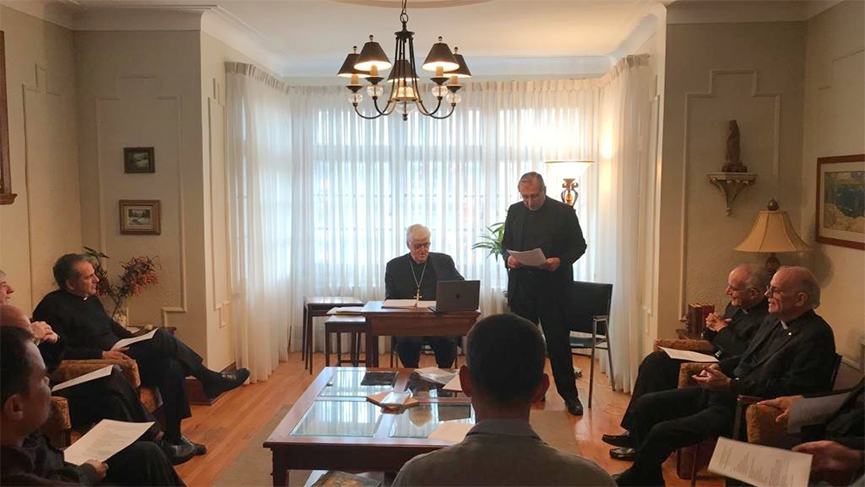 “Medical Aid for the Dying, Not Medical Aid in Order to Die”: Conference to Priests of the Cercle sacerdotal de Montréal by Bishop Simard, of the Pontifical Academy for Life / A Report by Father Fernando Mignone

Montréal, 27 October 2023. Can a priest administer the sacraments to a Catholic who is planning to end his or her life with the help of the so-called “medical” assistance in dying? The question is posed, after the legalization of euthanasia in Canada in 2016, which opened up a Pandora’s box of pastoral challenges. Valleyfield Bishop Noël Simard tried to clarify those challenges in front of some 30 priests during a conference organized by the Cercle sacerdotal de Montréal at the Centre Piedmont, in the neighbourhood of Outremont.

On October 15, Pope Francis named the bishop of Valleyfield, Québec, who is an expert in bioethics, to the Board of Directors of the Pontifical Academy for Life.

During the first part of the conference Bishop Simard explained the strategy of pro-euthanasia activists who use euphemisms and coin terms so as to confuse people. Henceforth, euthanasia is called “medical assistance in dying”. Many are those who are totally confused. The elderly and the disabled, as well as terminally ill people, are pressured to end their lives. And this is the reason, stated Simard, why we must clarify language and form consciences, while at the same time showing kindness and closeness with those persons tempted by euthanasia.

The priest is a minister of spiritual health and of accompaniment. If the terminally ill cannot be healed physically, it is necessary to take care of them till the end, not of eliminating them. This is because he or she has a dignity that remains even while deterioration diminishes their quality of life. True compassion is medical assistance to the one who is dying and not “Medical Assistance in Dying” (MAID). True tenderness is shown through palliative care. Today, the 47 palliative care centres in Québec are the target of pressure so that they will offer MAID, to the point where 29 of them do so now! If they don’t accept, the government can take away their financial support. On the other hand, the alternative to aggressive treatment is not euthanasia, but rather the care, giving comfort, and treating pain with analgesics such as morphine and even palliative sedation.

The speaker mentioned that on occasion of his 50th priestly ordination anniversary, last May 28, the faithful of his diocese established a Bishop Simard Fund precisely to support the terminally ill who die in their homes, as well as their natural caregivers.

We must therefore change the culture, we must accompany people who ask for euthanasia, not eliminate them. They often give out a cri de coeur when they ask for MAID, because they don’t want to be abandoned and they fear living in a state of intolerable suffering. Given the linguistic confusion today, the lack of distinction between the legal and moral domains, and the impression that it is medical care, these people may not be really conscious of the fact that MAID amounts to suicide.

So: can a priest administer the sacraments to a Catholic who intends to end his days with MAID? Opinions differ, but pastoral prudence suggests that it is preferable to abstain from administering the sacraments, or to postpone doing so. The shepherd of souls will attempt repeatedly to dialogue with the Catholic, while respecting his or her freedom. If the person changes his mind, or leaves the door open to a different attitude, he or she could go to confession, receive the anointing of the sick, and the Eucharist. Whatever the person’s position is, the pastor will assure him of his prayer and his  solicitude. Could the good shepherd celebrate the funeral of a person who has had recourse to euthanasia? In general, yes, except if his or her entourage is trying to instrumentalize the funeral to make of it an argument for euthanasia. The object of the funeral is to entrust the deceased to the mercy of God and to offer support, comfort and hope to their families and to the congregations.

Answering questions from the priests after the conference, Bishop Simard advised them to seek out valuable episcopal resources: from the Assembly of Quebec Catholic Bishops: the Pastoral Letter “Approaching Death in the Company of Christ” and the five steps of reflection “Palliative Care in the Light of the Word of God”. From the Canadian Conference of Catholic Bishops: the toolkit on palliative care “Horizons of Hope”. From the Belgian bishops, their declaration: “I Take You by the Hand. Pastoral Accompaniment at the End of Life”.

(Nota bene. This is what Wikipedia says about MAID.
Euthanasia in Canada in its legal voluntary form is called medical assistance in dying (MAID) and it first became legal along with assisted suicide in June 2016 to end the suffering of terminally ill adults. In March 2021, the law was further amended by Bill C-7 which permits assisted euthanasia in additional situations, including for certain patients whose natural death is not reasonably foreseeable…. In 2021, more than 10,000 people died by euthanasia in Canada.
Bill C-14, passed by Parliament in June 2016, amended the Criminal Code so as to legalize both physician-administered euthanasia (PAE) and physician-assisted suicide (PAS)... The bill disallowed for medically assisted death on the grounds of mental illness, long-term disability, or any curable condition and did not make euthanasia available to minors.
Bill C-7 amended the law so as to allow for euthanasia because of mental illness. The current law prohibits mental illnesses as being considered as a grievous and irremediable condition, but this prohibition is set to expire on 17 March 2023. After this date, persons with a mental illness will be eligible for MAID....
Human rights advocates have criticized Canada's euthanasia laws for lacking safeguards, devaluing the lives of disabled people, prompting health workers and doctors to suggest euthanasia to people who would not otherwise consider it, and killing people who were not receiving adequate government support to continue living.)

Pope’s November prayer intention: 'For children who suffer'
The feminism of Francis, the key to understanding his trip to Canada

The feminism of Francis, the key to understanding his trip to Canada