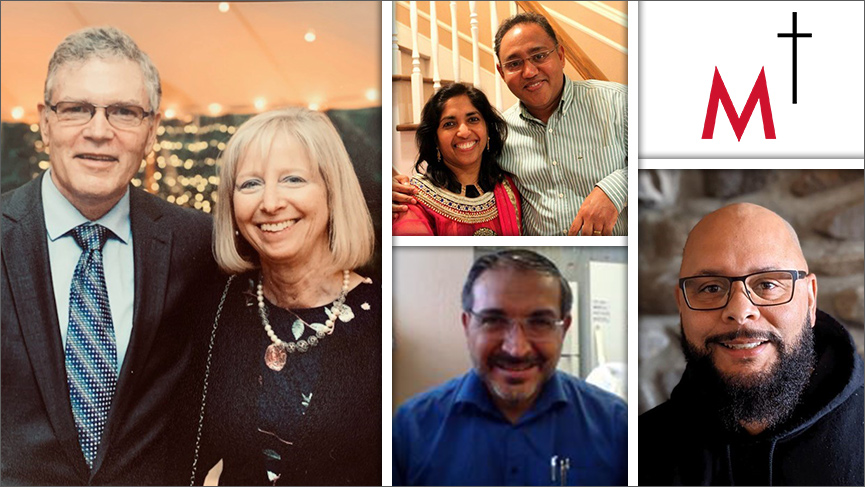 Bishop Faubert will confer the ministry of acolyte upon Cory Johnson, Rodolfo Zuzino, Benny Augustine Perikilamalayil and Michael Murray, and the ministry of lector upon Kevin Kaiser at a celebration this Friday, April 22. This event is another step in their progression toward the permanent diaconate. While each one of their stories is unique, they all bear the mark of a call that is foremost from God.

Cory: an encounter in the heart of silence
It was at St. Joseph’s Oratory, during a Christmas Mass to which his girlfriend had dragged him, that Cory had a very powerful experience that “opened his eyes” and led him to “become Catholic.” A few years later, after having a “personal encounter with Jesus” while on retreat, he began his diaconal journey with his wife by his side. “I already knew… I had a deacon at my parish who had a lot of experience. He told me: ‘I see you serving people in your parish. Have you ever thought of becoming a permanent deacon?’” This is how “doors open.” “If I can be of a little service, of help and of light in this world for those who are going through difficulties… This is my call, this is my work now,” says Cory.

The rosary as the way for Benny Augustine
“Let me know what you expect me to do for you, Lord.” Benny Augustine repeated these words on his way back from a retreat in Toronto. During his six-hour trip to Montreal, he recited the rosary three times. The next morning at 7 a.m., a priest from St. Joseph’s Oratory called him and told him God wants him to become a permanent deacon. A few months later, this call was confirmed again. This is how he began his diaconal journey, supported by his wife. He knows it was by the intercession of the Virgin Mary that God responded so clearly.

Rodolfo: a daily walk with God
Rodolfo and Maria discovered the gift of each day through the special care their eldest daughter needs. One day, the idea of becoming a deacon “came into his mind” and the path become clearer, little by little, as he served in his parish; his sense was confirmed through various signs from God. The couple is involved in their community and in their church, but they also live their faith in their “simple, routine life, filled with daily challenges” and “try to bring God into our ordinary, daily life and pray to him.”

Michael: putting one’s energy at the service of those in need
Michael “felt a call from God to share his resources — intellectual, physical and spiritual — in helping others” by asking himself how he could help the world. The closure of his former parish in another diocese set him “on the diaconal journey.” Initially angry about the closure, he realised that “if there is no one in church, there is no Church.” Michael is a husband, father and grandfather and he is now involved in his parish, Saint-Donat, where he is journeying toward the  permanent diaconate. What is most important for him is to nourish his spiritual life and to serve as best as he can: “I think when you do the right thing in the eyes of God, it’s always good.”

Kevin: being transformed
Kevin first felt the call to the permanent diaconate 15 years ago, but the path to realising the call only materialised a few years ago for this engineer and father. His institution into the ministry of lector is another important step in his “discernment” and will get him “more involved in what he will do eventually as a deacon.”  “I think the process of becoming a deacon is shaping me and making me more into the person I am called to be.”
To him, being a deacon in the heart of the world today is foremost a “call” and a “commitment to take on one’s responsibilities to serve one’s community.” Furthermore, it is “transformative,” as it forms a man into a person who also genuinely cares about the good of his community.

The celebration for the institution of the ministries of lector and acolyte will be held Friday, April 22 at  Mary Queen of the World Cathedral at 7:30 p.m.

Mass for Vocations to the Priesthood in the Diocese of Montreal